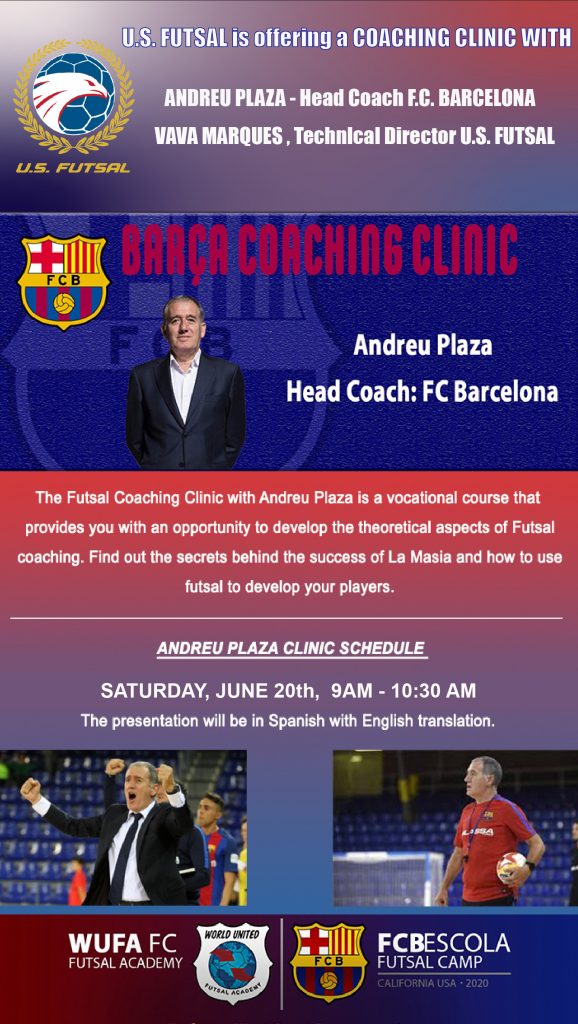 The Covid-19 may have removed teams, players, and coaches from the fields, but that won’t stop experienced coaches from their desire to gain an edge over their competition. They have taken advantage of many outreach continuing coach education in webinar type formats.  The true leaders in the game continue to sharpen their swords. In the sport of futsal – there is none better than Andreu Plaza.

With that in mind, U.S. Futsal is pleased to announce the opportunity to learn from one of the world’s best – FC Barcelona Coach Andreu Plaza. Plaza serves as both Technical Director for FC Barcelona, as well as overseeing the development of all youth players for the largest and most well known futsal academy in the world.

Barça were awarded the prize for ‘Best Team in the World in 2019’ in futsal, taking from 2018 winners Movistar Inter. It is the third time that Barça have claimed the award after previously being named the world’s best in 2012 and 2014. There can no debate about the decision with Barça in 2019 completing a memorable treble of the league, the Spanish Cup and the Copa del Rey as well as reaching the Final Four in the Champions League.

Coach Andreu Plaza completed the trio of awards for the Barça futsal team when he was named ‘Best Club Coach of 2019’. He succeeds Jesús Velasco as winner and becomes the second Barça coach to claim the prize following Marc Carmona’s win in 2012.

Dial by your location